Supermarkets can now only offer bags made from plant-based plastics, and those bags must be color-coded green or gray for use with recycling or trash. Citizens who don’t use the bags properly face potential fines.

São Paulo aims to increase recycling by requiring that only the green bags be used for recyclables, an unusual provision in a bag law. But critics are skeptical, saying the new regulation alone — without major investment in collection services — won’t greatly boost recycling.

São Paulo’s initial effort to ban plastic grocery bags in early 2012 was quickly halted by industry legal action and vocal consumers, who complained they were being cheated when grocers stopped providing plastic bags, which Brazilians rely on as liners for small trash cans at home.

Grocers can now offer only biodegradable plastic bags colored green and gray, or any type of plant-based packaging such as cardboard boxes, at no cost or for a few cents. The law says bags must have at least 51 percent plant-based content.

Stores that continue distributing non-biodegradable plastic bags will face fines of up to 2 million real ($644,000). Citizens must use green bags at home just for recyclables, or face fines of 50 to 500 real ($16 to $161).

“It’s not all about applying fines, it’s about creating a movement in the city for recycling,” said Simão Pedro, secretary of public services in São Paulo, in an April 7 news conference. “The city will adapt slowly and rely on the efforts of citizens and businesses in this educational process.” 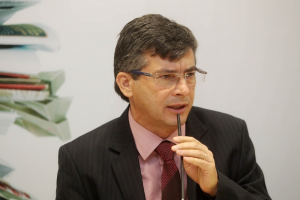 Latin America’s second most populous city, with 11.9 million people, generates 12,500 tons of residential waste daily, but recycles just 3 percent of it, according to local figures. Officials want to increase the recycling rate to 10 percent by 2016.

Municipal garbage collection is available for 68 percent of residents, or 86 out of 96 districts. The city says neighborhoods that don’t have public recycling collection won’t be inspected for proper bag use.

But since public recycling is far from city-wide, the law alone — without investment in broader collection and education — carries little weight, said Renata Amaral, researcher at the Brazilian Institute for Consumer Defense.

“The consumer in these districts [without municipal collection] … will continue to have those [green] bags taken to landfills,” she said.

Plastic bags are considered by some to be a major contributor to flooding problems in São Paulo. Large black and old plastic grocery bags can still be used for garbage under the new law.

Elisabeth Grimberg, coordinator for solid waste at the non-profit Instituto Pólis, says the law should have been focused on eliminating all plastic bags.

“To invest in creating a new [green] plastic bag means generating one more piece of waste that is not necessary for the functionality of recycling,” she said. “This reinserts plastic into the conversation, even though there is a replacement: the permanent reusable bag.”